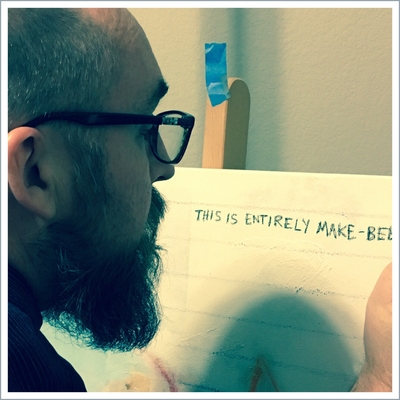 “Despite my ghoulish reputation, I really have the heart of a small boy. I keep it in a jar on my desk.”

― Robert Bloch
One way to absorb and take stock of the riveting, narrative paintings of Gabe Langholtz is to be objective and simply make a list of his recent subjects. A partial list might open like this:
1) A man’s shrouded erection elevates a bed sheet towards his navel in Morning Glory.

2) An open pack of Marlboros, an ashtray and an asthma inhaler appear on a table in front of a chair draped with a dress shirt and bowtie in
Dos and Don’ts.

3) A bottle of Chloroform and white handkerchief rest on a bluish-gray table in Match Maker.

4) A black man, whose eyes have been cropped out of the composition, gives an implied viewer the finger—a broad emphatic finger—in Blackbird.

Of course, that is just a quick sample and if the list were continued it would confirm that Langholtz is inventing a kind of parallel universe that is full of insinuations, narrative scenarios and dark humor. Connecting what he is doing to the work of other artists is tough to do—Langholtz is very much himself—but in some ways he is like the Dutch still-life painters of the 16th and 17th century who grouped objects in a way that made Calvinist assertions about human vanity. There is something of that sensibility—a moralist in a corrupt world—in Langholtz’s transcription of the 21st century and its problems. But Langholtz can also be very playful; more like Hogarth than Claesz in some crucial ways. “Humor has always been my lighthouse,” Langholtz explains, “I’ve had enough ‘seriousness’ to last me a lifetime.”

The seriousness came in the form of his older brother, who struggled with depression and committed suicide at the age of 26: Langholtz was 22 at the time. “It’s not an easy thing to witness,” Langholtz offers, “the ins and outs of mental hospitals, the burden of sadness on my parents, the arrogant defiance of my brother who rarely admitted that he needed help.” Despite the dark, parallel drama of his brother’s life and death, Langholtz also remembers a carefree side of his childhood, perhaps because his developing imagination offered a place to roam and play. “Growing up, I was somewhat of a dreamer,” he recounts, “and a bit naïve about the realities of adulthood. As a painter, my intent is to carry over this juxtaposition between perspective and content into my art; the youthful eye bearing witness to the contretemps of adult life.”

Langholtz came to visual art late. He started out as a musician/songwriter who thought of songwriting as “painting pictures with words” and had a lyricist’s knack for wordplay. After that he was an on-again-off-again abstract painter who painted in his garage and developed, somewhat to his annoyance, a local following. When neighbors dropped by they made cloying requests—“Paint like Picasso” was one—which Langholtz reluctantly satisfied. It was what he now thinks of as his “One Trick Pony” period: a time of bowing to the taste of others. Returning to the easel after a long-lasting hiatus, Langholtz had an epiphany: painting recognizable imagery allowed him to download the stories that kept intuitively coming to him. As a new kind of authenticity began to appear possible, Langholtz seized the opportunity to paint “who he really is.”

Seemingly, Langholtz is committed to “going against the grain.” To put it another way, authenticity is Langholtz’s protest against enveloping cultural shallowness. His paintings are bulwarks that can be lowered for those who catch his humor or can handle the candor. If you can handle and respect the artist’s “voice” it is very likely that you too have traded pretense for revelation. In See No, Hear No, Speak No, a still life that includes the banal signifiers of aging—dentures in a glass, hearing aids and glasses—Langholtz seems to be saying: “If you have made it this far you probably know a thing or two, as do I.” A pale green alarm clock— a classic “Vanitas” symbol—is ticking its way towards midnight, reminding us of the urgency of the conversation. Maturity is a mixed blessing, right?

The enormous BAND-AID® that covers the shin of a pudgy yet flattened figure in Boo Boo reminds us of the possibilities of healing while also hinting—through the nakedness of the stylized, androgynous figure it presents—that human vulnerability is far beyond what such a simple patch can protect. What might first appear a rather simple painting with a childlike title has opened up some rather profound territory. “Originally, the BAND-AID® was not intended,” Langholtz explains.  “The idea for it came rather last minute.  I added it, as I recognized it was needed to complete the story.” 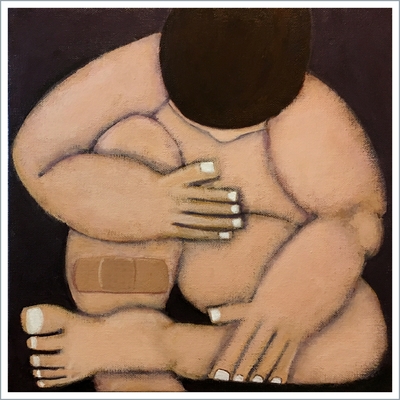 And so it was. That anecdote provides one more window into who Langholtz is and what he does. The story of his life—and the story of yours—is unfolding in ways that are unyielding, random and sometimes tragic. And yet, within each story there is the possibility of steering fate just a bit. A BAND-AID® can only cover a small wound, but maybe that is all that is needed. Gabe Langholtz now finds himself moving forward, ready and able to say the things that need to be said the way he needs to “say” them. Spend a few moments in front of his painting Sad Sack—which features a soft, Rothkoesque sense of tonal modulation— and see if behind the dour title and shaded creases you don’t detect a glimmer of satisfaction at its edges.


John Seed is a painter, writer, curator and educator based in Southern California and has been writing about art and artists for over 15 years.  His writing has been published extensively in The Huffington Post as well as in Hyperallergic and Poets and Artists.  http://www.johnseed.com/